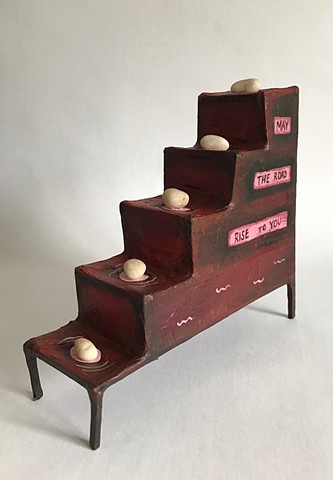 In Fall of 2016, I made two pieces about the exploitation of adjunct faculty at institutions of higher learning. Over the summer of 2016, I had been asked to manage a significant studio renovation, and was expected to do so without remuneration. Additionally, the same college that had recently completed the construction of a multi-million dollar nursing building chose to reduce my pay by two credits per semester. These two extra credits were awarded to me for kiln-firings during a semester. Unbeknownst to me, the reduction had begun by one credit for the previous four semesters. I was given no valid reason for the pay cut and would be expected to continue the studio work gratis. I had no option for resigning as the two classes accounts for a third of my annual income.

On the first day of the semester, ten minutes before class, I fell on the sidewalk in front of the arts building. My shoe stuck on the peaks of freshly set concrete that had been poured over the summer, and I tumbled – face first – into the walkway. The terrain was different, perhaps only a centimeter off. I wasn’t rushing. I wasn’t multi-tasking. I was however, preoccupied with my status as an undervalued and underpaid adjunct instructor.

My right cheekbone bore the brunt of the fall, immediately swelling to the size of a golf ball. My chin was cut and bleeding profusely. I broke down into sobs, releasing a summer full on tension. A CAT scan would later show that my face sustained no fractures, to the relief of my attending nursing staff. Thankfully, my medical expenses were covered under workman’s compensation. I healed slowly over the semester, and months later still feel a small bean-like knot on my face.

Each week as I returned to my class, I walked past the site of the fall. I photographed the bloodstain that saturated the concrete. No one had washed it away and it served as a reminder of how much I have given the school, in hours, in service, and now in blood. Each photo documented how the passage of time slowly diminished the splatter: my body’s signature fading steadily on an inequitable campus contract.

Reliquary for a Fallen Adjunct I and Reliquary for a Fallen Adjunct II show the undercurrent of unfair treatment of teaching scholars and professionals. An ivory tower of academia excretes blood into a first level red pool, spilling first over a rock beneath it. A staircase of stepping-stones in a cascading stream of blood leads to an abrupt end. An old Irish blessing: “May the road rise to you,” subverts the physical act of falling onto the walkway.