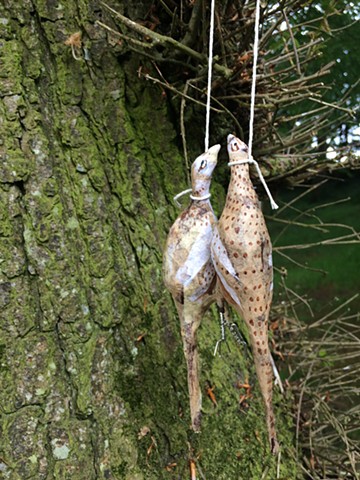 “Travel is the only context in which some people ever look around. If we spent half the energy looking at our own neighborhoods, we'd probably learn twice as much.” -Lucy Lippard, On the Beaten Track: Tourism, Art, and Place

The layers of history in a particular place fascinate me.

In May of 2016, I travelled to the Boyne Valley in Ireland. I visited several prehistoric sites, which over time, had changed into Catholic shrines.

In preparation for the trip, I recalled my travels in the UK and Ireland in the 1990s and prepared four papier-mâché pheasants. These pairs of birds, two females, and one male and female, are hanging from strings as if they were killed in a hunting party.

I chose to leave the females here as offerings at Saint Brigid’s Shrine in Faughart, Ireland.