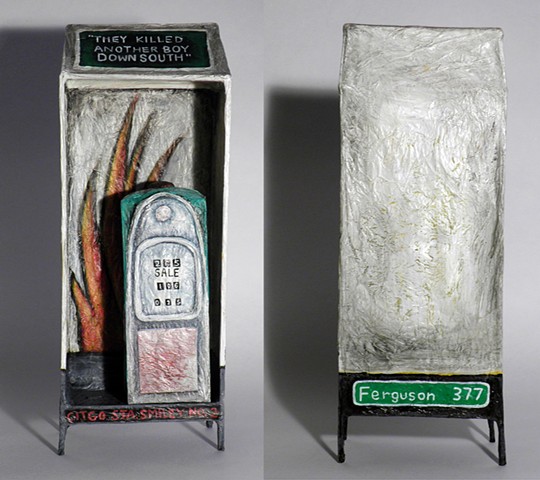 Less than two weeks after the shooting of Michael Brown in Ferguson, Missouri, I filled up my rental car’s gas tank at the Citgo gas station in Benton Harbor, Michigan. I waited in line for my turn at the gas pump and noticed a man listening to his car radio, clearly agitated by what he was hearing. I thought nothing more of it and made my way to the pump. Pleased that my economy car topped off at less than $20, I entered the convenience store at the gas station to collect my receipt. The man who had been listening to the radio was now in the store, and I stood next to him at the counter. He turned around, seemed startled to see me, then made his way to the exit. Receipt in hand, I followed him out the door. He stopped at the threshold as two young men were entering the store. He announced to them, “They shot him. They killed another boy down south!” Hearing about the police shooting of Kajieme Powell in St. Louis, from the voice of an African-American man living within 400 miles of the site, within an environment of palpable tension, impacted me more than any newspaper report of it ever could.

To illustrate this moment, I used a single gas pump modeled after one I saw the following day at an historic site. The machine stood unused, deteriorating, with numbers frozen from the day of its last use, when gas was twenty-five cents per gallon. I maintained this 1960s price for my small replica suggesting that the atmosphere at this service station in 2014 was close to what I imagine tensions must have been like during the civil rights movement. I included flames in the background to portend the volatility of this ongoing struggle. Similarly, it is a broken gas pump, with “NO GAS” written where a nozzle should be, implying an inability to move forward in the situation.